What is Black Friday and Cyber Monday

Black Friday is the friday after Thanksgiving. In 2021, Black Friday is November 26. This day is generally perceived as the busiest shopping day of the year. Also, the annual holiday shopping season will not really begin without a start of a vibrant Black Friday. For the economy, this day plays a crucial role which helps all types of companies from small/medium-sized to big ones increase revenues, improve brands and build up reputation as well as customer loyalty.

Just few days after Black Friday, Cyber Monday takes place on November 29, 2021 and keeps the similar excitement among shoppers and retailers. The term was created by marketing agencies to persuade people to shop online. As online shopping is an increasing trend, has Cyber Monday never been that important for your online business.

The number of people shopping over the three-day Black Friday weekend was lower, too. Only 135.7 million said they’d go out, less than the 140.1 million who said they would in 2014.

Spending is down, too. Here’s the breakout.

The recession created a permanent shift to thrift in retail trends. That’s not just a search for the lowest price, but also an interest in finding the best value for the price. The 2014 Black Friday survey showed the same. Nearly half (47.1 percent) said they looked in advertising circulars for the best deals, 35 percent signed up for retailer’s emails, 20.2 percent paid attention to TV commercials, and 21.3 percent relied on word of mouth.

Gift cards are becoming more popular. Eighteen percent of holiday shoppers used them in 2016. Almost half of people received a gift card on Christmas morning. That’s because people are more likely to ask for gift cards than clothing, DVDs, or jewelry.

In 2015, the average planned expenditure is $361 per person. 46 percent people expect to pay with credit cards and 43 percent expect to pay with debit cards.[17] Sales are up 8.1% as of 6 p.m. ET, according to IBM Digital Analytics. The average order is $131.66, flat with last year, though the number of transactions is up and people are buying more items on average per order.

In 2017, according to Adobe Digital Insights,[19] Cyber Monday hit a new record with $3.45 billion, and it’s the first time that online sales in one single day surpass $3 billion in US history. The numbers are up 12.1% from a year earlier. 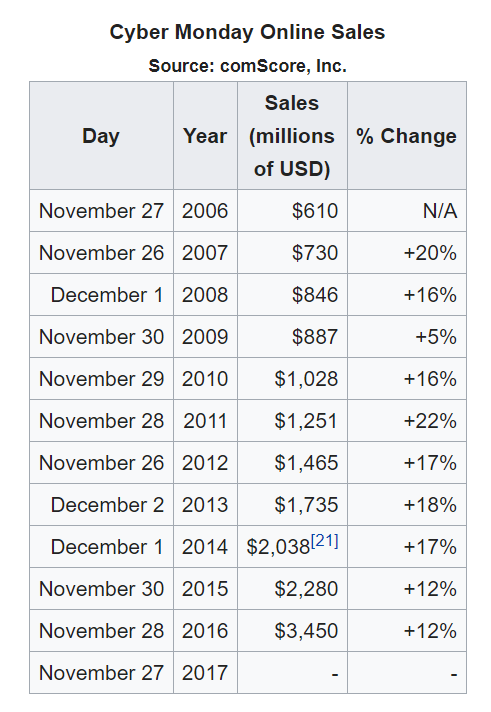 In 2017, Thanksgiving, Black Friday, and Cyber Monday all set records for online sales. The shift to online buying during the holidays is going to continue for 2018, and that’s more good news. While a few select items are still in-store only, it is easier than ever to complete all of your shopping online during Thanksgiving weekend and not miss out on anything. Additionally, mobile shopping has been increasing rapidly in recent years, and that trend will also continue

While spending on Thanksgiving is increasing at a rapid pace, it remains pretty far behind Black Friday when it comes to popularity. Last year, we predicted $2.07 billion in online sales on Thanksgiving, which would have been an increase of 19.77 percent from the $1.73 billion spent online in 2016. The figure turned out to be $1.93 billion, which is still strong growth. For 2018, expect $2.05 billion in online sales, which is an increase of 6.22 percent

Last year, we predicted that Amazon, Walmart, and eBay would be the most popular online stores on Black Friday and Thanksgiving. While Amazon and Walmart both finished in the top three, eBay actually regressed from its strong position in previous years. For 2018, expect Amazon and Walmart to dominate online sales. While the No. 3 spot is still up for grabs between Best Buy and Target, expect Target to edge them out.

While using a desktop computer is still a more hassle-free way to shop, mobile devices — including smartphones and tablets — are the preferred method for many shoppers on Black Friday. For one, they offer convenience that traditional desktops and laptops do not. Additionally, mobile websites are drastically improving. It is easier than ever to make a purchase at your favorite store’s website using your smartphone, whether it be directly on their site or via an app.

Online spending and sales data from 2016 came from Adobe 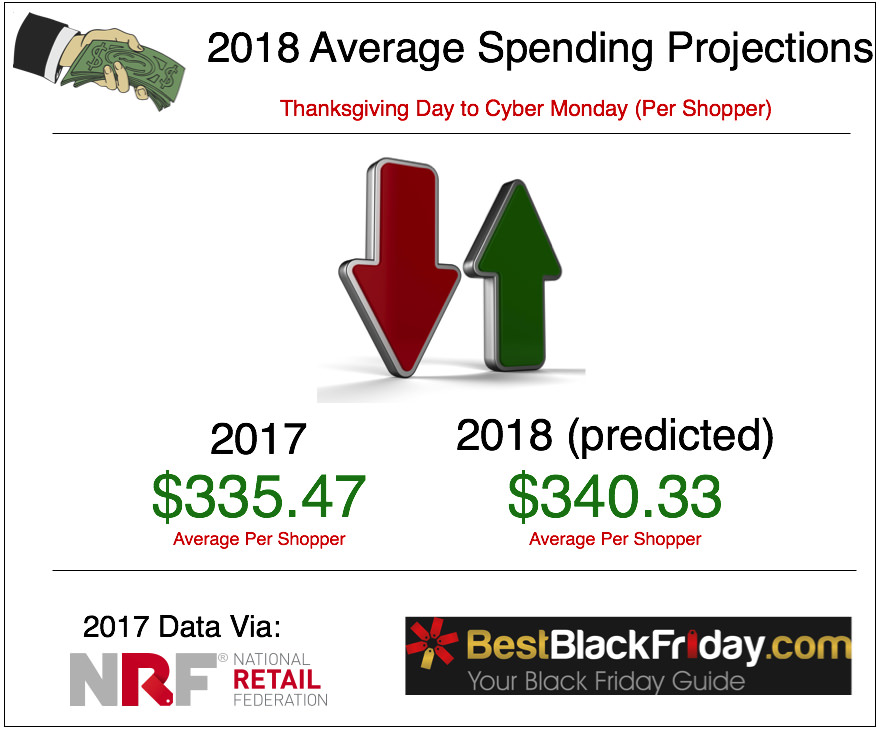 The National Retail Federation states that over a third of shoppers managed to only purchase items that were on sale. That percentage is likely going to remain at around 33 percent for 2018. Many people complete the bulk of their holiday shopping during Thanksgiving weekend, and it is impossible to get every single item on sale. 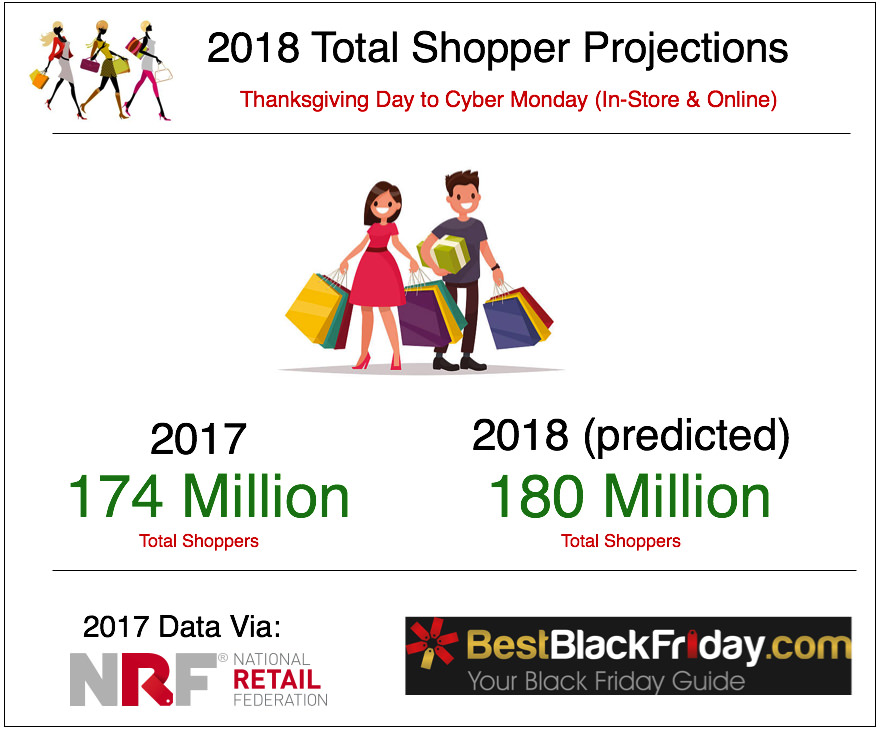 Despite the fact that numerous retail experts have been predicting Cyber Monday’s demise in recent years, it is only growing stronger. Here were the total sales and strictly mobile sales from previous years and a projection for 2017. 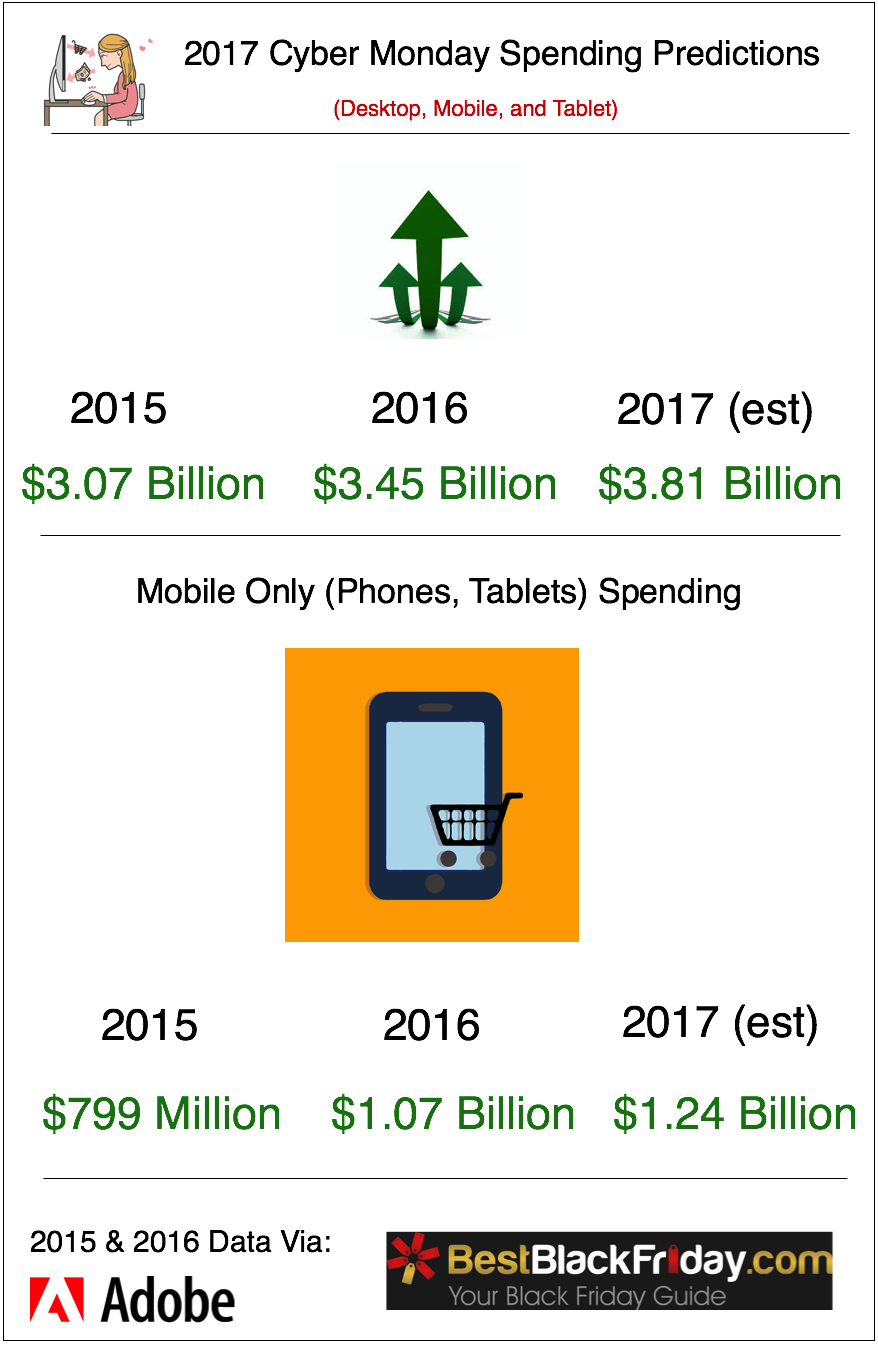 As it seems to do every single year, Cyber Monday set a record last year for total online sales in a single day. Shoppers spent $3.45 billion in 2016, which was $380 million more than in 2015. While the $3.45 billion figure is impressive, it really did not beat Black Friday’s $3.34 billion online total by that much. Regardless, Cyber Monday is as popular than ever, and you should expect at least $3.81 billion in sales for 2017.

It is important to remember that many Cyber Monday deals actually go live on Saturday and Sunday, which means the $3.45 billion figure from last year is probably a bit understated when taking Cyber Monday as a whole.

Like on Black Friday and Thanksgiving, mobile sales ate up a large percentage of spending on Cyber Monday. Shoppers spent $1.07 billion on mobile in 2016, which was $271 million more than in 2015. This trend will continue, and mobile sales should be around $1.24 billion. Strangely enough, Black Friday is still expected to do more in mobile sales despite having less overall online spending.

Headless Commerce: The Future of Ecommerce?

Shopify vs Magento: Which One is Right For You?